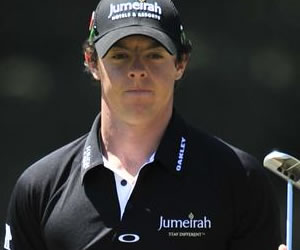 World No.1 golfer Luke Donald has claimed that Rory McIlroy has more talent than Tiger Woods, arguably the greatest man to have ever played the game.

Even those looking at Real Money Casino issues should note how Donald and McIlroy tee off together at the Dubai World Championship first round on Thursday, and the Englishman has been talking up his main rival to the No.1 world ranking.

Comparing the Northern Irishman to Woods, Donald said: “In terms of talent I think Rory has more. I think Tiger’s work ethic has always been tremendous and his mindset as well.”

Referring specifically to this week’s event in Dubai, Donald is aware that McIlroy could potentially overtake him in the world rankings. If the US Open Champion wins this week and Donald finishes outside the top nine, we have ourselves a new No.1.

Referring to the threat of McIlory, Donald continued: “I fully expected Rory to play well and put some pressure on me. I’ve always said I think that, of the guys I’ve played out here on tour, Rory has the most talent that I have ever played with.”

Something which could affect McIlroy’s success this week though is a virus he has picked up in the build up to the tournament in Dubai.

Speaking about this setback in his preparations, McIlroy said: “I visited the doctor yesterday. I won’t get the results back until later in the week.”

“My white blood-cell count was very low after the Maldives and Dubai when I had a couple of weeks off. So we want to see if the blood counts have gone back up again.”

“I’m not energy-wise where I want to be,” he said. “I’ll probably take off another day tomorrow and really try to conserve my energy and focus that all into the four tournament days.”

With £791,000 at stake for the winner in Dubai and a chance to end the year at the top of the world rankings though, McIlroy has plenty of motivation to play through the pain barrier.

Before the events in Dubai get underway though, there is a chance for you to check out some Great Casino Games Online () and pass the time before Donald and McIlroy get the action underway.