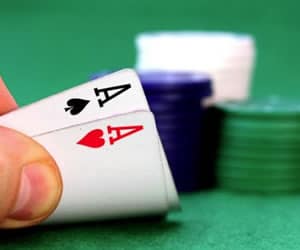 Imagine you went your day job every day, performed your duties to the best of your abilities and then at the end of the month they not only did not pay you your wage but they actually took money from you! Whilst this sounds absurd to most people it is exactly what poker can and does do on an alarmingly regular basis.

The problem with poker is that you can play absolutely perfectly, get your money in good almost all the time yet still lose because of the short term luck involved with the game. Most poker players have very few problems when they are winning but as soon as the chips are down and things are not going their way they simply fall apart at the seams.

Those using the promo code betfair note that one player who had mastered self control was the late David “Chip” Reese, regarded as many as the best poker player to have ever lived. Reese famously lost more than $2,000,000 to gambling legend Archie Karas in a series of fixed limit games that had blinds of $8,000/$16,000 but Doyle Brunson, Reese’s closest friend, revealed that if it had been anyone else in Reese’s shoes they would have lost at least double that amount but because he had great self control and resolve, Reese managed to limit his losses despite running horribly at the felt.

I keep mentioning self control but what about yourself do you need to control when you are losing? Firstly, you need to control your emotions, particularly anger, so that you do not go on tilt and begin playing overly aggressive and risk losing even more chips. Going on tilt when losing can quickly turn into a vicious circle that continually feeds on itself and I have seen people lose bankrolls that have taken months and years to build, decimated in minutes.

Also, you need to control the urge to attempt to chase your losses by moving up stakes. If there is any changing in stakes to be done you should be moving down to lower buy-ins not up where you could win your money back but you also run the risk of exaggerating your losses too.

Analysing your play, whether using the betfair poker welcome bonus or not, is also vital when going through a sticky patch where the results simply are not falling your way. Check your hand histories for pots where you lost too many chips and almost as importantly, if not more so, pots where you failed to extract the maximum value possible.

Finally, ensure you follow proper bankroll management and only play for stakes that your bankroll allows. Losing $100 from a $300 bankroll feels much worse than losing $1,000 from a $25,000 bankroll, despite being ten times the amount.