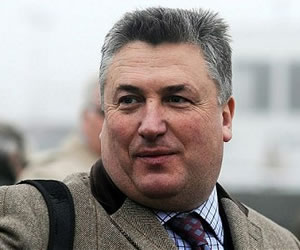 Paul Nicholls has been mapping out plans for his exciting five-year-old Kauto Stone who made a scintillating debut for the yard when hacking up in the Grade 2 Ladbrokes.com Chase at Down Royal earlier this month and is amongst the better backed outsiders for the King George VI Chase at Kempton Park on Boxing Day, writes Elliot Slater.

Whilst not ruling out the possibility of heading to the big Christmas period feature, Nicholls made it clear that the next race on the agenda for the half-brother to the yard’s superstar Kauto Star is the John Durkan Memorial Chase at Punchestown on December 11, adding that the main target for the French Grade 1 winner will be the Ryanair Chase at the Cheltenham Festival in March. People looking at the King George VI Chase betting odds should remember this.

The plan to head to Ireland again suggests that Nicholls is not specifically targeting the big Kempton race, but should the Irish event be a casualty of the weather, or his horse depart early in the Durkan Chase, then a run at the Sunbury track 15 days later would almost certainly have to enter calculations. Those looking at the Kempton Park betting will be keeping a close eye on him.

Kauto Stone rightly received rave reviews for his silky smooth win under Paul Carberry at Down Royal only four weeks after he joined Nicholls’ Ditcheat yard, a performance that suggested he might go a considerable way towards emulating his illustrious sibling who at almost 12-year-old is now entering the twilight of his career having won two Cheltenham Gold Cups, three Betfair Chases, and a remarkable four King George VI Chases. Jumping like a seasoned pro Kauto Stone had his rivals in trouble a long way from home and crossed the winning line an effortless six-length scorer from Roi Du Mee, earning quotes of a best priced 20/1 for the King George VI Chase.