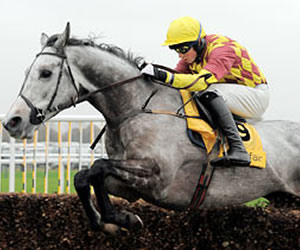 David Pipe has confirmed that his highly progressive young staying hurdler Dynaste will take his chance in the Grade 1 Lough Derg Long Walk Hurdle at Ascot on December 17 in what will be his first encounter with the outstanding triple champion Big Buck’s, the horse that dominates the entries for the prestigious contest, writes Elliot Slater.

Big Buck’s has sauntered to victory in the last two renewals of the ‘Long Walk’, last year beating Lough Derg (in whose honour the race is named this year) for the second time, following up his victory over the same rival in the contest in 2009.

The only horse to make a race with Big Buck’s throughout last season was Pipe’s Grand Crus who has now moved on to make a name for himself as a novice chaser, and the Nicholashayne handler feels that his Dynaste is improving fast enough to give a good account of himself against Paul Nicholls’ champion who will look to extend his unbeaten streak to a remarkable 14. Those following the best online Cheltenham odds should remember this.

Dynaste is following a very similar path to Grand Crus having put up an eye-catching performance when tackling three-miles for the first time in his career at Haydock last month, routing a strong field in the Grade 3 Fixed Brush Handicap Hurdle in scoring by eight-lengths from Benny Be Good. That win came off a mark of 141, and having been raised 17lbs to a new high of 158 Pipe feels that now is the right time to see just how good the five-year-old grey could be, judged against probably the best staying hurdler of all time.

Currently on offer at odds ranging from 10/1 to 20/1 for the Ladbrokes World Hurdle at the Cheltenham Festival in March, a sound effort from Dynaste could advance him to second favouritism behind Big Buck’s who remains an odds-on market leader across the board.

Donald: McIlroy Is More Talented Than Woods No King George For Wayward Prince
Scroll to top