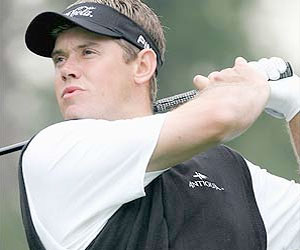 Lee Westwood was left frustrated following his second round at the British Open today after he recorded a one-under-par 71. The Englishman missed several chances on the greens and played a lot better than his score suggests.

Westwood said “If I was sitting here at 10, 11 or 12 under that would reflect the way I’ve played.” Instead, he sits tied for fourth on six-under-par, so although things are going relatively well, they could be a lot better.

Those who bet on golf tournaments like this know that they are won by players who take their chances to record an impressive score and this is why Westwood will be slightly disappointed with how things turned out.

Venting his frustrations at the day’s events, Westwood said that “sometimes you don’t get what you deserve”.

Moving forward into the weekend though, the world number three still believes he has what it takes to close the gap on the leaders and secure a first major title.

He says that he should “be there or thereabouts” come Sunday afternoon, especially if he keeps playing as he has been with the added ingredient of luck.

Elsewhere, fellow Englishman Paul Casey was also left slightly underwhelmed by his second successive round of 69 on the Old Course. He was on track to better his first round score, until a nightmare triple-bogey at the 17th.

Overall, both Westwood and Casey are still majorly in contention with the Sports betting odds, but they will need to raise their game even further if they are to be in with a chance of holding the Claret Jug on Sunda

Why Do We Calculate Betting Margins?

Woods ~ Westwood Is The Best