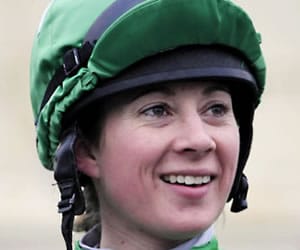 Hayley Turner has had to admit defeat in her race against time to get back in the saddle before the end of the current Flat season following her fall at Bath in late-August in which she sustained a broken ankle, writes Elliot Slater.

The ‘pin-up’ girl of British racing had been enjoying her best ever season and looked all but certain to surpass her previous best total of 100 winners (achieved during the 2008 campaign) until being unshipped from Marcus Tregoning’s Rose Aurora on the way to post at Bath on August 31, only 12 days after she had ridden her second Group 1 winner of the season aboard Margot Did in the Coolmore Nunthorpe Stakes at York’s Ebor Festival meeting. Although Turner sustained a clean break and had hoped to be back in October, she now admits that it will most likely be after Christmas when she returns to race riding and intends to go full steam ahead in the 2012 campaign to build on her 83 winners this term and her high profile successes at the summer’s showcase meetings. Those looking at the Breeders Cup betting will be wishing her a swift recovery.

As well as her shock success on Margot Did for Michael Bell, Turner received all the plaudits for her handling of David Simcock’s Dream Ahead in the Darley July Cup at Newmarket earlier in the season, producing the enigmatic sprinting talent at the perfect moment to win virtually ‘on the bridle’ from the high-class Bated Breath to become the first woman to win a Group 1 race in Britain outright – Alex Greaves had dead-heated for the Nunthorpe on Ya Malak some years earlier. Those following the betting will have been impressed.

Whilst sidelined Turner has had to watch Dream Ahead land another Group 1 success in the Betfred Sprint Cup, and also must have been looking on with mixed emotions when Wigmore Hall, (who she rode into fourth place in the Arlington Million), won in Grade 1 company at Woodbine, Canada, in mid-September.