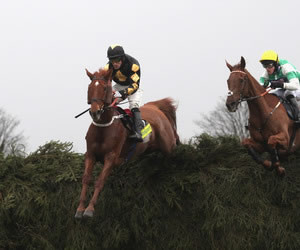 Vic Venturi put in a polished performance to land one of Ireland’s principal John Smiths Grand National Trials, the Bobbyjo Chase at Fairyhouse, and is now amongst the ante-post favourites for the big race in April, writes Elliot Slater.

Winner of the Becher Chase at Aintree earlier this season, Dessie Hughes’ charge had, (like so many other serious Grand National Runners, been kept to hurdles events through the winter whilst the handicapper was working out the weights for the race. Having been allotted 11st 6lbs, Hughes returned the 10-year-old son of Old Vic to fences for the Bobbyjo, and he duly ran out a comfortable 8-length winner from stable companion Black Appalachi, another Grand National candidate who shaped well and also looks bang on course for a return visit to Merseyside.

The prevailing soft ground proved ideal for Vic Venturi, who was never far from the pace and took up the running three out before surging away from his rivals. Similar underfoot conditions for Hughes’ gelding would be a distinct bonus on National day as he clear relishes give in the ground.

Flood reported that his mount had given him a great feel throughout the three-mile-one-furlong contest and that he (Vic Venturi) felt as if he had improved further compared to his winning performance at Aintree in the autumn. For his part, Hughes was delighted with both the winner and the runner-up and is convinced he has two very serious Grand National candidates this time around.

On the back of this performance it came as no surprise that punters were interested to have a wager on Vic Venturi who is now generally on offer at around 14/1 amongst the Grand National Race Horses, a price that could contract further as the big event approaches.

A horse that clearly stays well, jumps soundly and has consistently acquitted himself well when facing quality opposition, Vic Venturi is surely one of Ireland’s leading hopes to bring the John Smith’s Grand National back to the Emerald Isle.