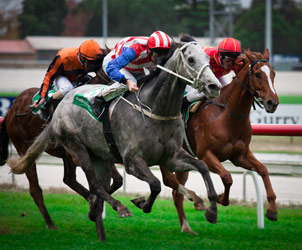 You would not have had to be a genius to figure out that the horse that bolted up in a Towcester bumper recently has all the attributes of a potential star performer in the sphere.

Red Sherlock is his name, and the rave reviews he received from pundits giving tips for Cheltenham 2013 offer a serious clue as to the possible destiny of the Festival Bumper in mid-March, writes Elliot Slater.

Trained by David Pipe, Red Sherlock was sent off a solid 7/4 favourite to make a winning racecourse debut in the 14-runner Free Tips@GG.com Intermediate National Hunt Flat race, a contest run on heavy ground at the Northamptonshire circuit famed for its gruelling uphill finish that often sees runners staggering around like drunks in the closing stages.

As it transpired, neither the very testing track nor the demanding underfoot conditions proved any problem for the newcomer, the gelded son of Shirocco racing wide throughout under Timmy Murphy, as he sought the best ground before easing through to lead inside the final three furlongs.

From then on the race was over as a contest as the four-year-old powered effortlessly clear on the bridle to score by a stunning 23 lengths, prompting the Racing Post ‘Close Up’ writer to describe the performance “led over 2f out, scampered away, hacked up”.

Red Sherlock is certainly bred to be decent being out of owner David Johnson’s smart performer, Lady Cricket, who, as well as being a prolific winner for the Pipe team, has also produced the very useful Swing Bowler, unbeaten in her five career starts and fancied to go very well in the Betfair Hurdle at Newbury this month.

Even Pipe himself was impressed and surprised at the ease with which his charge won on racecourse bow, and bookmakers certainly sat up and took note as he was trimmed to a top price of 12/1 to land the coveted 2013 Cheltenham Festival Bumper itself.

All Bets Off For Remote Gambling