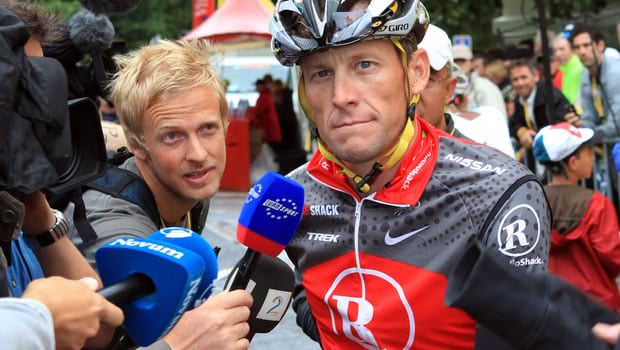 [quote style=”boxed” float=”right”]“There comes a point in every man’s life when he has to say, “Enough is enough.” For me, that time is now.[/quote] His story is the stuff that legends are made of. Not only did he compete in one of the world’s most gruelling sports where fitness and endurance are critical, he overcame cancer along the way and went on to dominate the world of cycling. Many regard him as the greatest cyclist of all time, winning seven Tour de France titles between 1999 and 2005, but others see him as nothing more than a cheat and one who got away with it for far too long.

When he first began treatment for his cancer in 1996, Lance Armstrong was given just a 40 percent chance of survival. Of course he did much more than simply survive and what he went on to achieve seemed almost impossible; perhaps that was part of the problem. Lance Armstrong’s remarkable comeback from testicular cancer captured the attention and admiration of the world. But at the same time his recovery and subsequent success, in a sport with a long history of doping, raised serious questions about how he did it. Was he cheating? His sport’s association, USADA (the official anti-doping agency for Olympic sports in the United States), has long been convinced that he was.

Of course Armstrong isn’t the only sportsman to suffer testicular cancer and to fight back to become a champion.

Former English jump jockey, Bob Champion won the Grand National in 1981 riding Aldaniti after being diagnosed with testicular cancer just two years earlier. Major league baseball player, Mike Lowell was diagnosed with testicular cancer aged 24 and went on to win three World Series titles and to be included in the All-Star team four times. Former Washington Redskins punter, Josh Bidwell fought a long battle with cancer and went on to be named for the Pro Bowl in 2005. At no time were any of these sportsmen suspected of using performance enhancing drugs, so why the suspicions around Armstrong?

Well firstly it’s about the history of the sport itself. Doping has been endemic in cycling almost from its very inception. In 1910 Paul Duboc was doped during the Tour de France by a rival and failed to finish the race. In 1924 the first real drug scandal arose when the Pelissier brothers admitted to the use of strychnine, chloroform, aspirin and cocaine to maintain them on the Tour. By the 1930’s drug taking was the norm for the Tour, with the rule book reminding riders to bring their own drugs as they would not be provided by the organisers.

By the early 1960’s amphetamine and other drug use was commonplace, with a few competitors overdosing and dying. But it wasn’t until June 1965 that the use of performance-enhancing drugs became illegal. The following year drug testing began in the Tour de France when Raymond Poulidor became the first rider to be urine tested.

Despite the testing doping continued to be a major problem in the sport throughout the seventies, eighties, and nineties with drugs becoming increasingly sophisticated and more difficult to trace. Many riders admitted to using drugs, and it almost seemed that most riders took something to enhance their performance. Since then hardly a year has passed without some major scandal relating to doping on the Tour, and cycling is considered to be by many the most drug enhanced sport on the planet.

So what of Lance Armstrong? Armstrong has been under constant suspicion since the 1990s by those who refused to believe that he was a clean rider in a doped-up sport. The fact that he won cycling’s premier competition over and over again only fuelled their suspicions. After all it just wasn’t possible; it would make Armstrong almost superhuman, especially after his cancer. Armstrong became known for being a brutal competitor, forcing himself through gruelling training regimes that nobody else could match. Jealousy, gossip and accusation were bound to follow.

Armstrong won his first yellow jersey at a time when doping scandals had damaged the reputation of the race. He was leading when a trace amount of a banned anti-inflammatory, corticosteroid, was found in his urine. Fortunately cycling officials allowed that he was authorized to use a small amount of the cream to treat saddle sores.

After Armstrong won his second jersey in 2000, French officials investigated his Postal Service team for drugs use. That investigation concluded with no charges, but the allegations didn’t stop.

In 2002, former personal and team assistants accused Armstrong of having steroids in a Spanish apartment and disposing of syringes that were used for injections. Again nothing was proven.

In 2004, a promotions company refused to pay Armstrong a $5 million bonus for winning his sixth Tour de France before it had investigated allegations made by the European media. Two books published in Europe, ‘LA Confidential’ and ‘LA Official,’ also raised doping allegations and, in 2005, French magazine L’Equipe reported that retested urine samples from the 1999 Tour proved the use of banned drugs.

Armstrong fought every accusation with denials, even lawsuits against the European press that reported them. Even so he was pursued and this led to angry public disputes with USADA, the World Anti-Doping Agency, some former team mates, his own assistants, even Greg LeMond, the first American to win the Tour de France. When Armstrong decided to throw in the towel earlier this year, dropping an expensive legal battle to clear his name in the process, Travis Tygart, the head of USADA, dismissed Armstrong’s lawsuit as an attempt at ‘concealing the truth.’

Armstrong said in his statement at the time: “There comes a point in every man’s life when he has to say, “Enough is enough.” For me, that time is now. I have been dealing with claims that I cheated and had an unfair advantage in winning my seven Tours since 1999. Over the past three years, I have been subjected to a two-year federal criminal investigation followed by Travis Tygart’s unconstitutional witch hunt. The toll this has taken on my family, and my work for our foundation and on me leads me to where I am today – ﬁnished with this nonsense.”

Armstrong was immediately considered guilty by default, banned from the sport for life and stripped of his seven Tour de France titles.

So which is he, a clever fraud or a persecuted hero? It’s true, he’s never tested positive for drugs; accusations have been made but nothing has ever been proven, but it’s very strange that he should give up protesting his innocence particularly as he knew what the consequences would be. At 41, with his career behind him, perhaps he doesn’t care any longer. Besides, nobody can simply rewrite the history of the Tour de France for the seven years from 1999 to 2005; Armstrong can’t be written out of the story.

Even with the very recent announcement that the US Anti Doping Agency is about to reveal key evidence around the case, the real fact is that, drugs or not, Armstrong won those tours and nothing can ever change that.