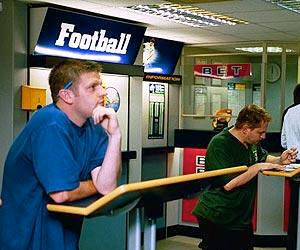 Years ago I used to run/manage licensed betting offices. They were places where you knew virtually every customer by name. As soon as a ‘face’ appeared through the door you could just about guarantee what bet would be coming over the counter to await its fate later in the afternoon. There were plenty of ‘rubbish’ bets, the yankees, canadians, patents, round robins etc merrily going through the till during the morning session. little old ‘Mary’ would totter in about 11 am, regular as clockwork, fag in corner of mouth, walking stick in each hand and deliver her usual crumpled ticket with 2 x 25p wins + 25pe/w double the two selections. £1 per day, win, lose or draw.Cannon fodder. One shop I managed was in a large village where the betting office was the focal point for most off the community. £500’s of these multiple bets were quite common prior to racing starting; a veritable heap of tickets for any settler to plough through race by race.

The afternoons would be a different kettle of fish altogether as your ‘race by race’ punters would set their stall out to skint you on a daily basis. These were the punters that wanted at least a £5 interest on every race-until they went skint, which eventually most did. Turnover of £2K per day was not uncommon, so, as long as none of the morning ‘rubbish’ bets actually connected, there was a good chance for the bossman to ‘nick’ £500-£800 per day-given the normal variation of results from the tracks. Betting offices, years ago, were joyful community places where smokers and non smokers congregated to beat the ‘aulde enemy’-the bookie. Nobody cared about fighting their way through a wall of smoke to get to the counter with their next ‘certainty’ – even less bothered when attacking the pay-out window!

The point of going through all of this is to show you how the government gained its revenue from the bookies. The Levy Scheme. It was a scheme whereby bookmakers (shops) were assessed on their turnover/profit. Obviously, the more ‘rubbish’ bets a shop took in the mornings the better chance it had of survival & profit, thus vast sums of money went to the Levy Board each year as betting offices went through a boomtime of patronage.

It was during this magical time (70’s/80’s) that the bigboys (Ladbrokes, Hills, Corals etc) started ‘clocking’ afternoon punters who bet occasionally-at £50 per time or more. Think about it folks, one 4/1 winner to a £50-£100 stake easily accounts for the mornings bets, thus made daily profit difficult. Individual proprietors, with a reasonable racing brain came to the fore, for it was they that started taking good money during the afternoons and living on their opinions. They also started contributing much more to the Levy Board each year. Betting Offices were always the bastion of the working classes. Smoking & gambling went hand in hand, as did drinking & smoking. July 1st, 2007 came and went.

A new dawn arrived for the betting offices, a new clean air dawn actually. Many daily punters began to be, well, not so daily. They couldn’t stand gossiping in the betting office anymore whilst enjoying a cigerette and a coffee. The whole atmosphere changed within days of the ban as people no longer stayed and chatted, no longer drank coffee. They simply came in, placed their bets and left. The community spirit died in those first 3 months of the ban-and so did bookmakers turnover!

It’s taken 3 years but the true cost of the ban to the racing world had had to be admitted and the regulators of the sport are warning of dire consequences for the sport if funds do not reverse their current trend and increase again.

2007-8 saw the Levy Board peak when raking in £115m, a sum that gave the Levy Board plenty of funds to distribute in prize money, sponsorships, race-course facilities etc. This year we see the Levy Board sqealing in anguish as they only have only £76m to spread around-a drop of almost £40m in 3 years. This can only mean a cut in racecourse fixtures and JOBS.

Betting Office turnover has dropped dramatically in the last 3 years with many ‘one man’ operations closing altogether through lack of patronage; the decline started long before the recession arrived on our doorsteps!

Many punters now prefer to bet online; internet accounts have blossomed since the smokeban. phone accounts are rife but internet betting has really taken off over the last 3 years simply because people can sit at home, press a few buttons whilst having their fag & coffee and bet to their hearts content. Where rain made the trip to the betting office an irritable chore (until they got inside and dried out) the rain now urges the computer betting market to grow and grow.

You check in most betting offices nowadays and you will not find the hardcore race by race punters in there anymore-they have quickly become extinct. Sure, you’ll find a few souls gathered around the ‘Global’ machines that gobble up £20 notes with great rapidity. The lure of a £10K jackpot far overshadows betting on the horses/dogs these days and many shops rely on the machines for their weekly expenses. The machines, of course, are of no use to the Horserace Betting Levy Board-who are £40m down in 3 years of purifying the air for the betting office staff, who now spend most of their shifts bored senseless through the dearth of customers. Nearly 400 of the smaller offices have closed over the past 3 years; yet again the government have denied themselves income tax etc from honest, hard working souls prepared to put their opinions and money on the line. 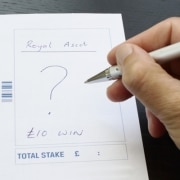